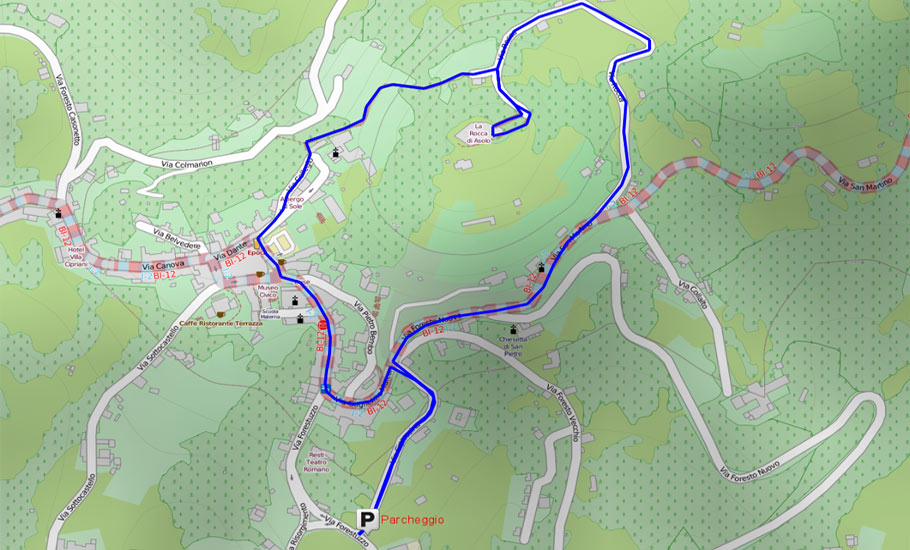 The path originates from the church of San Martino, among rows of Scots Pine, Spruce, Olives, Poplars blacks, blacks Carpini and manna-ash. The man’s hand blends the natural environment still intact, which is supporting the scenario of these sites charm. Each house is well maintained and manicured gardens in a wise, gratify the look of the hiker. The trail leads to the east and then, immediately, in continuous curve, first north and then west. These forested areas are still well preserved. The vegetation is intricate, lush, enhanced at every step of interesting species. In spring blooms follow each other and are quite showy. A broom intensely colors of yellow-orange color the borders of the path, while the Hawthorn gives his white robe with the Lantana and the Balloon May. Following the boundary wall of the park, you will come across the entrance to the street of San Martino, which is the classic walk of Asolo. The course, always flat, in 2.5 km leads to the Fornét fork, where the road climbs a bit looking out on the landscape of the hills and valleys of Monfumo, Castles and the Alpine foothills. During the walk, all in the sun, so pleasant in the winter, you pass the church of San Carlo, which is part of Villa Rubini, you meet the road that goes to the Fortress, and later the Church of San Martino with its bell tower. From here, wanting to do a variant, you can go down the road that leads under the Church to meet the Foresto Nuovo in Breda Valleyfrom which you can go back in the city. Continuing our walk over San Martino, after the old inn of Bersagliere, you enter the Valley of FORNET towards the fork, passing close to the source of the Water of Regina. The water of this spring, which now provides a part of the aqueduct of Maser and Asolo, was collected and channeled at the time of Caterina Cornaro to feed the fountains of Barco. The Bembo speaks of a source that flows from the mountains.

It is a short but precious trail, used since ancient times by the foothills population to travel to the center of Asolo. The starting point is at the intersection of Via Lori, via Sottocastello and via Magre. We are welcomed by some splendid specimens of Oak once ubiquitous in these woods, also required by the Venetian shipyards since ancient times to build their ships. A row of hornbeam characterizes the first part of the path to the typical vegetation of the foothills comprising about six hundred shrubs and trees and the rest of herbaceous plants. It is a path enjoyed in all seasons, and for some blooms in the spring, when, alongside the strains of scolopendria, white Snowdrops and blue Scille are present. Among sedges, grasses, Elders, elms, maples and willows, we can appreciate the Beretta Spindle-Tree or the priest, the Tree of Heaven or Ailanthus and Gelso, that might tell us a lot about the local history and cultivation of the silkworm. We meet then splendid examples of Hackberry or Spaccasassi plant also linked to agriculture as its wood, durable and flexible, it was used, among other things to make handles for whips. A steep climb leads us towards the center of the city, Sottocastello, between beautiful examples of Lime or even Bagolaro and Ailanthus.

The path is laid out in the middle of the hilly cliffs ranging from Asolo and Cornuda and form the watershed between the plain of Maser – Caerano in the South and Valcavasia in the north. It begins and ends in the municipality of Maser, but is also accessible from Asolo. The tour takes place in an area where human intervention is fading from year to year. Where this has occurred, the nature is taking over: the wood becomes wilder, logs ruin and almost bar the path, a large variety of tree species occurs and the animals also find a congenial environment to them, while gashes in the hills opened by the collapse of the galleries of the old mines, lay bare the internal structure. The itinerary offers insights from several sources: geological, natural, scenic, historical and cultural.

The trail starts near the municipal building ex Pagnano d’Asolo mallet, an ancient workshop used since the old times, for the manufacture of iron. The presence of the building of the mallet is documented from 1468 but it is conceivable that the factory insists on the pre-existing foundations of an ancient forge. Over time the building was used as cloth follo (workshop in which fulling has been operated), since 1979 the activity of iron working has ceased. After leaving the building of the ancient mallet, the trail runs alongside the “Muson”, a stream that comes from nearby springs in the municipalities of Monfumo and Castelcucco and that then crosses the Asolano and Castellana in the plain between the rivers Brenta and Piave. After about 500 meters, on the right side you will meet a path descending from the hills above the village Forabosco. After further 1,000 meters you will reach the Casonetto, leaving the Muson stream on your left, and after a short stretch along the road to Monfumo it fits in via Monte dei Frati. Going up the paved road to the right you can see the Monte dei Frati which takes its name from the convent of S. Girolamo of the Franciscan Friars Minor Reformed and in front of it there is the imposing building of the fortress. After passing the village of “Barettina” you will enter via Riformati, and at a certain point on the left there is the indication for the Rocca. Using an old country road, trail of sufficient size today, which rises to the asphalt road called via Rocca a few hundred meters from the fortress, if you turn your back to it, you’ll have an amazing view of the landscape towards the Monte Grappa massive. From the point of arrival of the path you have several alternatives, namely to the right the access to the Fortress or the staircase leading down to the Old Town, to the left instead the way down that leads also to the Old Town or the continue at the same level, east along the path that leads to Maser and the Rocca di Cornuda.

Paths of the hills of Asolo