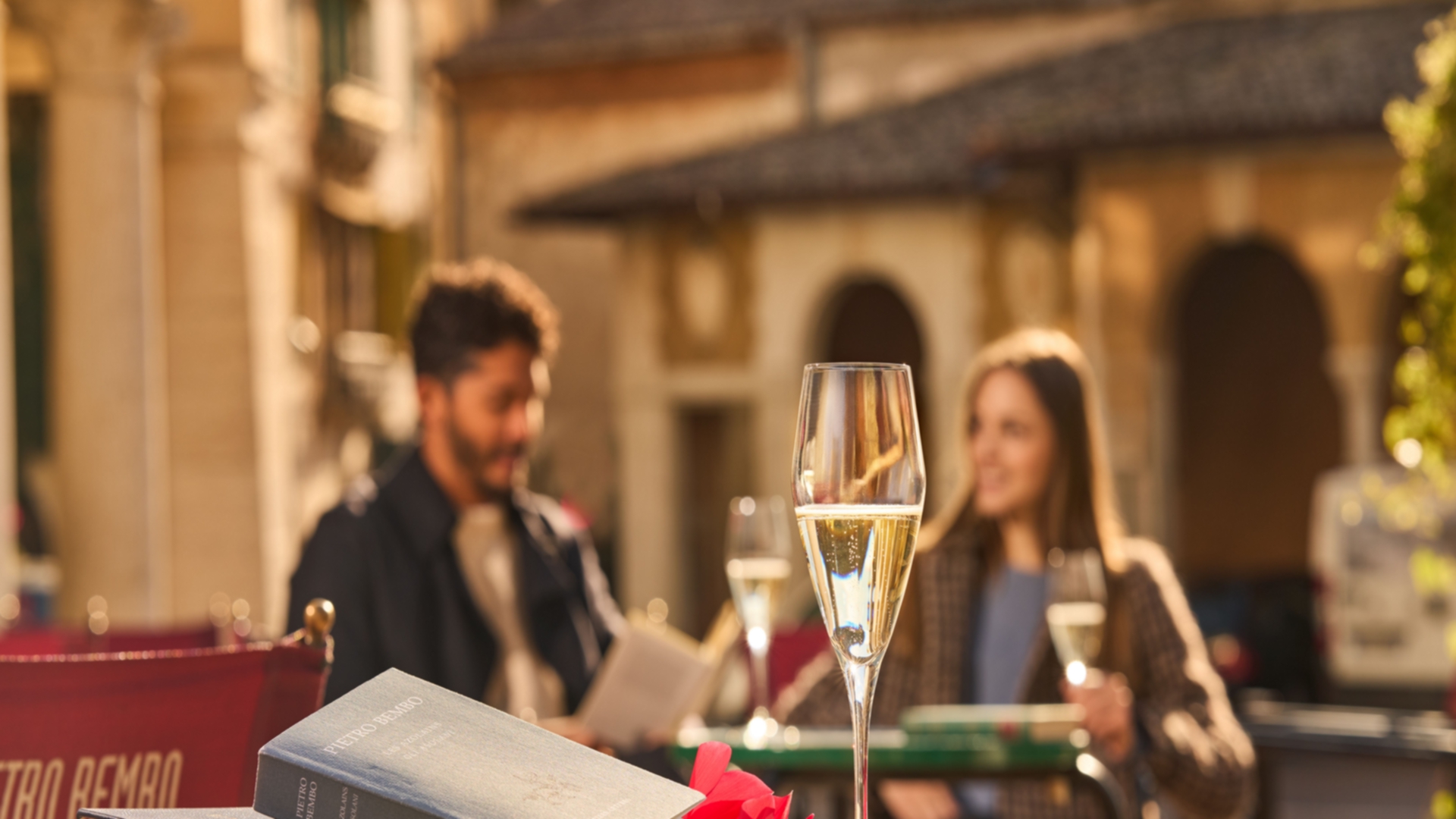 The flavours of local produce, the flavour of fine food, the workshops of the craftspeople who together with taverns and cafes face onto arcades and squares are part of the inviting climate that one perceives walking through the streets of the village. It is the leisurely rhythm of living as an “Asolan”. Perhaps the atmosphere of Asolo would not be the same if you could not stop off at a wine bar or without the aromas and pleasures of the table coming from fine food and wine of ancient tradition. Restaurants and trattorias, like everything in Asolo, are in great demand. Here you can savour dishes from a simple, wholesome culinary tradition, linked to the changing of the seasons and the influence of Venice: from “sarde in saor” sauce to “bigoli in salsa”, mushroom soup, pasta and beans, Treviso or Castelfranco radicchio (a kind of red lettuce), pumpkin and white asparagus from Bassano.
One can try the typical “cicchetti”, fine wines or fanciful specialities such as ice-cream in elderberry-based liqueur or “Tintoretto”, a variant of the Bellini cocktail with the flavour of pomegranate. When you are seated at the little tables of the cafes, it is not hard to imagine the famous personalities who have stayed in the city over the last two centuries from poets or musicians, such as Robert Browning or Gian Francesco Malipiero to celebrities like Marcello Mastroianni and Catherine Deneuve, or Yoko Ono to name but a few.

In Asolo it is still possible to find wood baked bread and in the speciality boutiques you are spoilt for choice in front of the dazzling array of local salami and cold cooked meats, wines, grappas, oils, jams and delicious sweets.
The typical produce of this area can be defined as niche products impossible to find elsewhere; they are distinguished by the care taken over organic cultivation to preserve ancient traditions and particular local production such as pearl white corn, cheeses such as Morlacco and Bastardo, the Biso (pea) of Borso del Grappa, dwarf beans of Levada, the Monfumo apples, oil production in the foothills of Mount Grappa that has its northern most appendix in the region, Maser cherries and Grappa honey.
Vigorous reds and important whites such as Merlot, Cabernet, Prosecco, Chardonnay, Pinot, Incrocio Manzoni are the first class wines of the area that are served on Asolan tables or that can be sampled in the wine bars. Asolo is an important centre for “Montello e Colli Asolani” doc production, and the best local selections have also won many awards.
Part of the national circuit of Città Del Vino (Wine Cities), every year in August with the “Calici di Stelle” (Wineglasses under the stars), as in other Italian cities the best wines of the territory and typical local produce are celebrated with tastings.

The climate of the area of DOC Montello – Asolo Hills is typical of the temperate area, the result of the original integration between factors such as latitude, proximity to the Mediterranean and local climate factors that act as modulators. The progression of the hills must be pointed out among these, which generate a wide range of effects due to exposure, to sunshine and daytime heating of the slopes; to the nocturnal accumulation of cold air, especially close to the slopes of Monte Grappa, and the effects of breeze regimes coming from the Po Valley and the Piave Valley. It is characterized by hot but not muggy summers, and relatively cold winters, while the rainfall is spread fairly evenly throughout the year.
It covers an area of approximately 20.000 hectares, mostly hilly, but which also includes large portions of flat land joined to the hills.

The area of Valcavasia highlights the characteristics of the pre-alpine slopes. Within the hilly environment there are marl limestones, marls, argillites, siltstones, sandstones and conglomerates formed in the Tertiary alternate and are greatly deformed by tectonic movements.
The lithological alternation also finds an immediate visual comparison in the form of elevations. More compact structures have created a steeper and more rugged landscape (Asolo Hills) while more malleable substrates (marl and clay) have generated over time gentler shapes in correspondence to Montello. The area of Montello, with its flattened shape, the result of an original and unique evolutionary framework, shows the presence of terraces and karst phenomena.

Here the typical Bordolesi and Renane varieties, following the Napoleonic domination took root, giving great qualitative returns: Merlot, Cabernet and the various types of Pinot and Chardonnay are very widespread DOC wines. Alongside these Glera for the production of Prosecco is certainly the most extensive vine variety and is the largest generator of revenue for the wine industry.
It is also very important to remember the recovery operation in progress of the Recantina vine and, subordinately the Bianchetta vine
Asolo Prosecco Superiore DOCG and Montello Superiore DOCG are situated at the top for quality production. These are only some of the products of this corner of Veneto, full of history and tradition that boasts wines that are at the top of the most important international competitions.