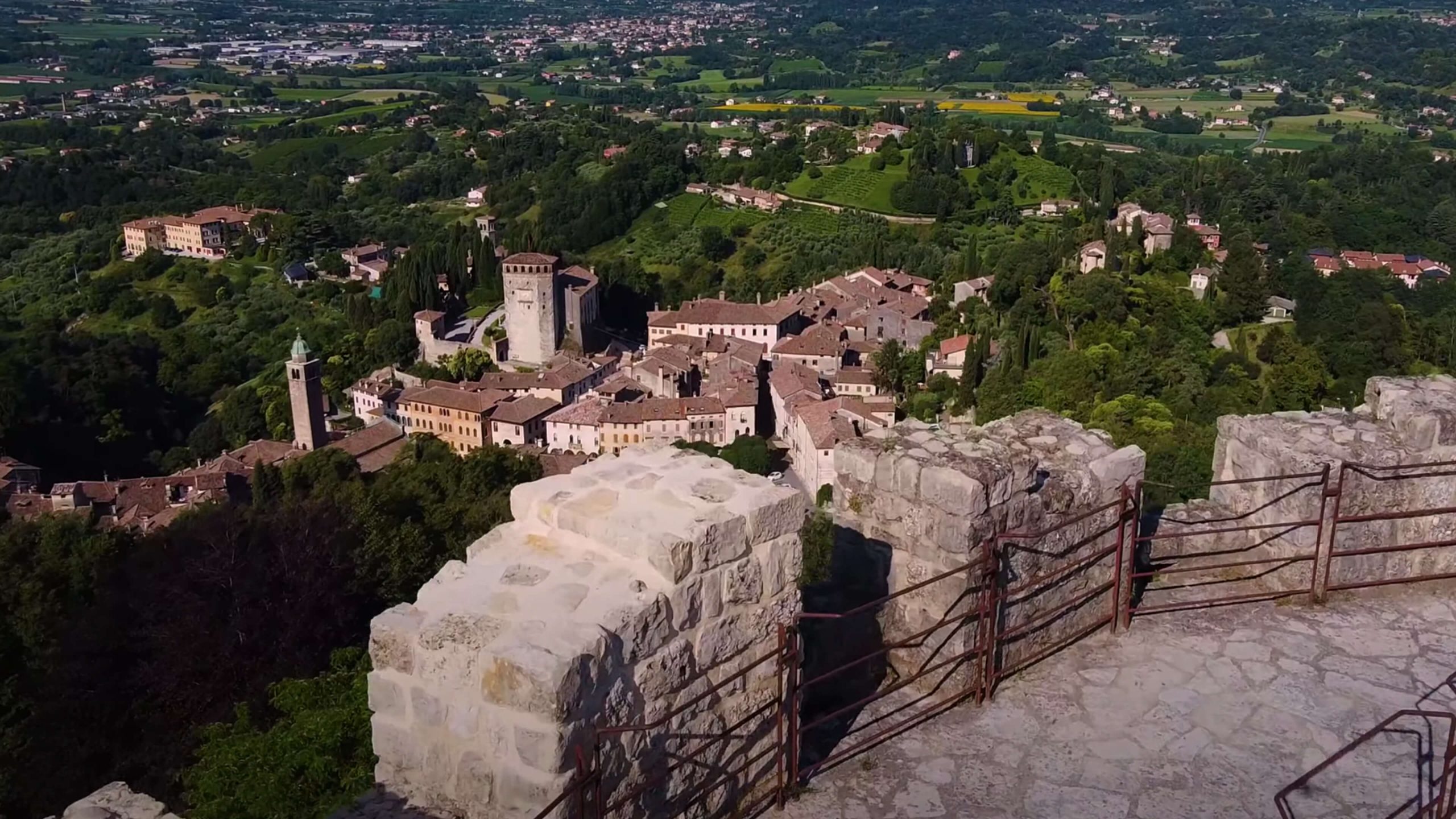 This urban walk is dedicated to all the curious who want to fall into the temptation of discovering what is hidden along the alleys that unwind from the main streets of the arcades between the ancient buildings of Asolo. A half day to get involved in the glimpses that are hidden a few steps from the most famous monuments of the village, along the perimeter of the ancient walls to widen the gaze outside them.

1) The first steps of the walk in the village of Asolo must have the symbolic monument of the square as a starting point: let’s start from the navel of the historic center, from the Fontana Maggiore (1). Until a few years ago, still fed by the millenary Roman aqueduct, the fountain has always been a meeting point for the life of the Asolo people and a memory of the history of the city and the lion of San Marco, who, sitting as a sign of peace, protects the coat of arms of Asolo, it is a reconstruction of 1800 by Antonio dal Zotto to reintegrate the original one destroyed in 1797 when Napoleon’s French troops arrived. This date, 1797, put an end to the Podesteria of Asolo, cutting the umbilical cord that kept the village tied for more than four hundred years, from 1388, to the Serenissima Republic of Venice. But let’s go back to the fountain and follow the lion’s gaze to begin to loop through the streets of the center.

2) We take the ascent of the steep Via Bembo, named after the cardinal who composed Gli Asolani, dialogues on love set in the Asolan court of Caterina Cornaro between the fifteenth and sixteenth centuries. The path of the picturesque road follows for a stretch that of the medieval walls (2) of Asolo. We pass on the left the tower-house of Sant’Andrea and go down the stairs that lead us to the point where until the end of the nineteenth century there was the main entrance to the city: the Porta Dieda. Of the ancient gate remains the annexed Torre Dieda, starting here via Marconi, which in the corner curve encloses the eighteenth-century Villa Fietta Serena, another admirable Asolan work by the Venetian Giorgio Massari.

3) Continuing under the arcades on the left side of the road we finally find the main entrance of Villa Freya (3), the Asolan home of the English explorer and writer Freya Stark; in the luxuriant garden of the villa, during opening hours or by reservation, it is possible to admire the remains of the Roman theater of Asolo (1st century). After passing the gate of Villa Freya, the short descent to the left takes us towards the Portello di Castelfranco, the most recent of the access gates to the walled city, opened towards the end of the fifteenth century to allow entry to Asolo from the south. Here the ancient Casa La Mura is grafted into the surrounding walls, where at the end of the nineteenth century the poet Robert Browning, wrote Asolando, from the asolar verb, meaning “having fun in the open air”.

4) Close to La Mura, the sixteenth-century Fontanella Zen (4) marks the beginning of via Browning, with its cool and shady arcades that give shelter to taverns, shops and shops, harbingers of irresistible scents and colors of the culinary tradition and artisanal.

5) Before emerging into the main square, let us be tempted by curiosity and leave Via Browning to cross the street and skirt the side of the Cathedral (5). We continue and immediately on the left we find the entrance to a tiny chapel, entitled Chapel of Christ, a place of intimate devotion of the Asolans. Exactly opposite we can enter the Cathedral from the ancient porch of the ‘400, the Cathedral, dedicated to Santa Maria Assunta, preserves inside works of great historical and artistic importance such as the altarpieces by Lorenzo Lotto and Jacopo da Ponte in the left aisle or the 16th century baptismal font in the Chapel of the Blessed Sacrament in the right aisle, a gift from Caterina Cornaro to the city.

6) Leaving the main entrances, in front of us rises the building that was once the bishop’s palace and now houses the sections of the Civic Museum (6), a place that room after room brings to life the centuries-old history of Asolo from archaeological finds to valuable paintings up to the memory of the women who made the name of the village international: Caterina Cornaro, Queen of Cyprus, Armenia and Jerusalem, the Divine Eleonora Duse and the eccentric English traveler Freya Stark. To reach the Museum just go up the short staircase that leads to Piazza Garibaldi. At the corner we will find the IAT (Tourist Information and Reception Office) where we can stock up on material to learn more about Asolo and the whole area. Leaving the office, the Palazzo della Ragione (7) rises on the left, a place of public administration during the Venetian Podesta office. The building is divided into the upper Sala della Ragione where a precious marble by Canova representing Paris and a Cenotaph from the Canova school are kept; on the lower floor there is Loggia del Capitano, a completely covered part of the square of Asolo to protect the citizens from the sun and bad weather and which collects tombstones and frescoes, memories of ancient Asolo buildings and places that have been abandoned or demolished over the centuries.

7) Going up along Via Cornaro we approach the spur of rock that supports the Castle. After the short climb, we take the cobblestones that go up to the left and enter through the large door into the area of ​​the Castle of Caterina Cornaro (8). Inside the building, in what was once the throne and reception room, now houses the Duse Theater (9). Climbing the steep staircase of the Reata Tower, you can see other enchanting views of the city of a hundred horizons, as well as from the short panoramic walk that looks to the south or from the Belvedere della Specola to the north that offers a glimpse of the buildings that wind along Via Santa Caterina and in the distance gives the best view of the Monte Grappa Massif. On the hill on the left stand the silhouettes of the Fresco of Villa Contarini known as Degli Armeni (10) and the particular dome of its oratory.

8) We resume our steps and at the end of the cobblestones of the Castle we find ourselves in front of Piazza D’Annunzio. The building with massive white columns is Palazzo Beltramini (11), seat of the Town Hall, built in the 1700s by Giorgio Massari. Above an arch of the opposite building there still remains the plaque of the Monte di Pietà set up at the end of the 15th century to compete with the money lending activity of Jewish families, who had their homes along Via Belvedere and in Contrada Canova, which just north and west of where we are. On the facade of the building north of the square, at the intersection of four balconies, the faded image of the Duce’s face covered by the helmet recalls one of the least glorious moments in the history of Asolo and Italy.

9) We go down along the silent Via Canova until we reach the Porta di Santo Spirito or Santa Caterina, a fourteenth-century access to the city walls. Casa Duse (12) is the two-colored building, red and white, which rests on the arch and on which a plaque written by Gabriele D’Annunzio has been affixed to commemorate the Asolan stay of the Divine. The room that Eleonora Duse used to live in is the room whose windows open right above the arch. We go up Via Canova, passing Piazza D’Annunzio on the right and continue straight along Via Dante. At the end of the street we look up to the right on the ancient Gothic House (13). We leave the Gothic House behind us to continue along the slope of Via Collegio that takes us to the historic Albergo al Sole, a refined place of hospitality and refuge for illustrious guests who animated the twentieth century in Asolo.

10) We continue to climb along Via Collegio, which runs along the left side of the hotel: at the end of the climb we find the Porta del Colmarion, which more than the others has maintained its medieval character; Going up a little to the right of the door, we find the seventeenth-century complex of the Convent of SS. Peter and Paul (14). We go down to the central square along the stretch of Via Collegio that runs along the other side of the Albergo al Sole and which gives us a beautiful view of Villa Scotti Pasini (15) and its hanging garden. Going down the short stairs we reach the square and in the shadow of the chestnut trees of Piazza Brugnoli (16) we stop to admire the wonderful Villa Pasini, dominated on the summit of Monte Ricco by one of the faces of the Rocca (17).

11) We go down along Via Roma, imagining the splendor of the Roman baths whose remains rest under the porphyry mantle of Piazza Brugnoli and whose waters were fed by natural sources from the hills conveyed into the Bot (18). In front of us we return to see the Fontana Maggiore, the starting and ending point of our itinerary.

Itinerary 2: the embrace of the walls of Asolo